It's officially trade season, ladies and gentlemen. The All-Star break has come and gone, which means that soon it's time for teams to truthfully evaluate where they are this season. Sandy Alderson was right in saying that the trade market is only beginning to materialize at this point in the season, because no matter how badly a front office pursues a player in June, it's unlikely that anything will become of it immediately. Backing off until the deadline looms larger is a helpful strategy to more effectively assess a team's needs. Not every team is able to figure out whether buyers or sellers until just about this point in the year, where the team has already played roughly 90 games, and it becomes clearer who should be in contention at the end of the year. It also helps to ensure that both sides receive roughly equal value for the assets they are trading away. The longer teams wait, the more "fair" a trade will be.

In case you haven't heard this said at least five times a day over the past month and a half, the Mets need a bat. The return of David Wright isn't necessarily a guarantee, which means that unless Dilson Herrera looking markedly better in his latest stint in Vegas, Ruben Tejada will be playing shortstop for a team with playoff aspirations. Lucas Duda has been a catastrophe for a while, throwing up a highly upsetting slash line of .166/.279/.287 in his last 43 games. Juan Lagares has never been a very good hitter, but this year he's even worse than expected. Kevin Plawecki has been great recently, but Travis d'Arnaud looked primed for an All-Star season if he weren't stopped by two separate injuries.

And now for everyone's favorite whipping boy, Michael Cuddyer. I liked the deal at the time, because it was clear that the Mets needed a corner outfielder, and he was one of the only options out there. Sure, the contract was a little pricey, but I thought he'd be worth at least most of it. I preferred him to Melky Cabrera because the Melk Man's performance has been hard to predict, and the Mets couldn't afford a down year from him. There was also talk about Nelson Cruz, despite the fact that his second half was significantly worse than his first half. Without allowing hindsight to affect my view, all things considered, Cuddyer was the guy.

Unfortunately, he's been an abject failure to this point. He's having the worst season of his career, which is to be expected at age 36, but the extent of his decline is the surprising part. He's certainly earned his new names, Michael Cruddyer, as well as my favorite, Michael Cadaver.

I do think that the pitching is good enough that technically, the Mets can sustain this level of hitting and make the postseason, so they don't need a hitter. Not trading for a bat will not kill the season. But it makes all the sense in the world, and it could be the thing that pushes them over the top. Whether or not that last sentence is equal to need, well that's a semantic debate.

First off, we need to look at the trade assets before diving into the trade market. Dillon Gee has absolutely no trade value at this point. Sandy blew it with him. His value was highest in the middle of last season, when he was outperforming his talent, and Alderson kept holding out to find the perfect trade for Gee. A combination of overvaluing Gee and hoping some other team overvalues Gee, has led to a pitcher who has little value to his own team and none to anyone else. 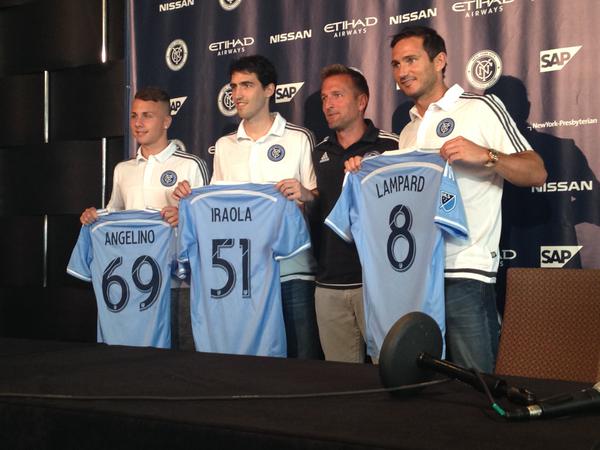 Much like fellow defender Shay Facey, Angelino will be making his professional debut with New York City after being loaned from Manchester City, NYC's English sister team, where he spent his youth career. He's a confident player, and injects a lot of skill into New York City's back line. When asked how he felt about joining a team laden with great veterans like David Villa, he responded: "I never would have imagined playing alongside Pablo [Alvarez] and players like Villa and Lampard, and I must take advantage of the opportunity." That answer even further underscored his age and relative inexperience, because it reminds us all that he grew up watching these men who are now his teammates, and while David Villa in his heyday with the Spanish national team and in La Liga, Angelino was just reaching puberty.

On the other side of their translator was Andoni Iraola, who comes to the team after spending his entire professional career in the system of Athletic Bilbao, and having been on the big club since 2003. After finishing a very successful career in Spain, the 33 year old finds himself in an entirely different situation in New York. Perhaps the most important change is that he's coming from La Liga, where there are only a few teams (but really, mostly two) that have a shot at winning the title each season, to a league where, as he put it, there is a lot of parity. As for everything else, whether it be adjusting to a new country, a new city, a new team, etc., Iraola said he had spoken with former Spanish teammate David Villa prior to agreeing to move to NYCFC, and Villa had nothing but "positive things" to say about his experience so far in New York. Undoubtedly, Villa's thoughts were a big factor in Iraola's eventual decision to join his new club.

After those two finished taking questions, out came Coach Jason Kreis and his newest midfielder, English legend, Frank Lampard. As a Chelsea fan myself, simply being in the same room as Frank Lampard made Tuesday incredible. While Lampard said he hasn't necessarily had a New York moment just yet because he hasn't had the opportunity to fully explore the city, he's excited for the opportunity. Lampard considered the move to New York City "a very easy choice to make." He's ready to "live in this great city, and join this new project" after finishing an incredible career in the English Premier League.

Jason Kreis has a lot on his plate right now. These three new players, along with the arrival of Andrea Pirlo in the near future is great overall, but could potentially hurt the team in the immediate future. When a team gets such an influx of talent at once, if not handled correctly by the coach, it could ruin the team chemistry. Especially with New York City playing very well over the past few weeks (outside of their game against the Red Bulls), it's up to Kreis to make sure that while he installs the new players into the lineup, he doesn't affect the comfort level that the current players have built up with one another. He was confident in his abilities to add players while maintaining the mojo when I asked him about just that. Kreis said that he's not too worried about it, because the players he's adding all have a lot of character, and will do whatever is best for the team. He reminded the media that while he considers it difficult to add players in midseason, it's not impossible. He has ideas as to how he'll manage the roster in the near future, but he wasn't prepared to share it with the world.

Kreis was excited, and his three new players were equally pumped. July 7th was a very important day in the history of the franchise, and all fans should be very excited about what's to come next.