I started this week by tweeting (@WilliamBotchway) all of my Thanksgiving Day picks. After it looked like I was in for a rough day after the first quarter of the early game, I actually started off pretty well:

LIONS (-7) over Bears. The Lions' offense should get back on track against the terrible Bears' D
— William Botchway (@WilliamBotchway) November 27, 2014

COWBOYS (-3) over Eagles. They're probably the better team, and playing at home. Easy money. And, this means no chance of 8-8! Go crazy
— William Botchway (@WilliamBotchway) November 27, 2014

Week 12 Preview: Jets at Bills...Sort Of

PROBABLE
Jets: Every player with an injury concern is listed as probable, and has practiced in full all week

After two straight weeks of longing for my wonderful commentary, and having to settle for my impersonal quick picks, I'm finally able to write a full picks column.

I made my Thursday night pick on Twitter, as per usual, when I don't forget of course (@WilliamBotchway). Here was this week's pick:

Swing and a miss!

Once again, I have a lot of work to do, so I'm going with the quick picks for the second straight week.

I know, I know, I'd hate to deprive you all of my wonderful commentary on each game, but I just missed three days of school last week for college visits, and there's a lot of things to be done.

Speaking of college visits, while visiting a school in North Carolina, I completely forgot to make my pick for Thursday night's game. You're going to have to trust me here when I say that I definitely would have taken Dolphins -4. They're the better team, and playing at home. That's a win for me.

I make the rules here, damn it.

The Rangers just beat the Penguins in an awesome and hard-fought game in Pittsburgh 3-2 on a shootout goal by Dan Boyle.

Boyle snuck the puck around Marc-Andre Fleury while falling down in round 3 of the shootout to give the Rangers a 2-1 win in the shootout. Or so we thought.

The Rangers celebrated awkwardly, and both teams left the ice, but the referees stood huddled in front of the official scorer's table. A few players straggled back onto the ice before the refs officially called everyone back out to continue the shootout. Before most people could get a handle on what just occurred, Brandon Sutter beat Henrik Lunqvist with a wrist shot before Marc-Andre Fleury saved a Rick Nash shot to secure the victory for the Penguins, who had just left the ice dejected a few minutes prior.

As Sutter was about to begin his penalty shot, I received this notification: 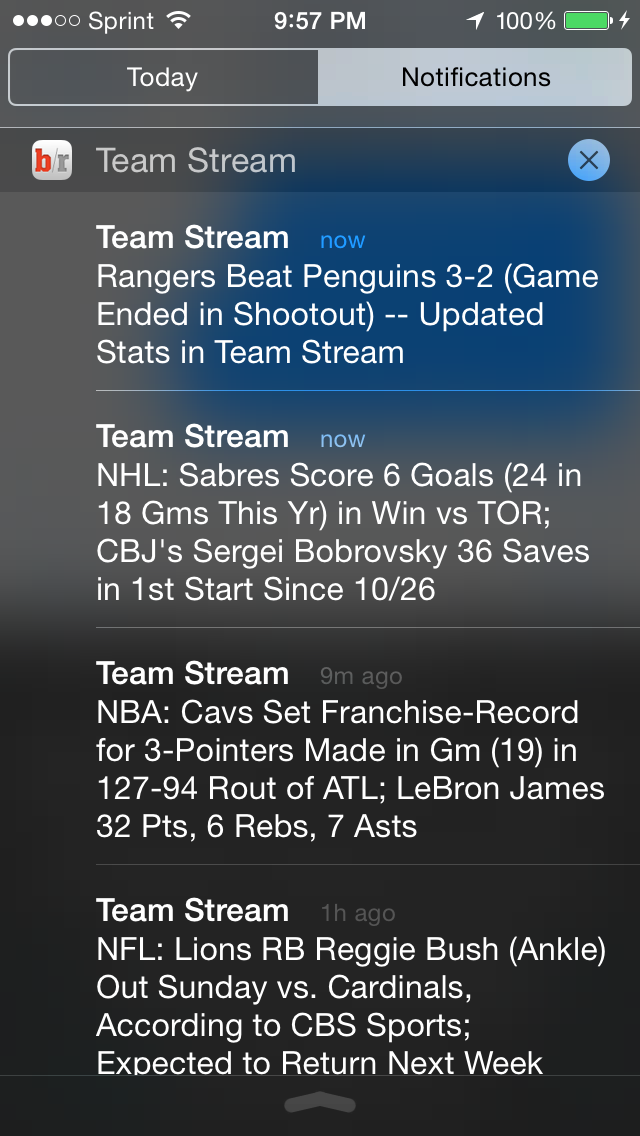 It was the right call, because NHL rule 24.2, Penalty Shot Procedure, states:


No goal can be scored on a rebound of any kind (an exception being the puck off the goal post or crossbar, then the goalkeeper, and the directly into the goal)

Boyle's shot hit his stick again after coming off the post, leading to it sneaking past Fleury, who had absolutely no chance to save it. So, everything in that situation went according to the book. What the refs should have done was made sure to keep both teams out of their clubhouses while reviewing the goal.

But, it's only fitting that a game that involved Lee Stempniak tying the game in the first period 15 seconds after Blake Comeau gave the Pens a short-lived lead, a 4-on-3 power play in overtime that ended with two players on each team exiting the box and playing 5-on-4 regular season overtime hockey for a few seconds before an incredible save by Lundqvist on a Kris Letang breakaway, Evgeni Malkin laying a clean, but powerful hit on Dan Girardi in the third period, sparking a scrum and seemingly concussing the Ranger defenseman, only for Girardi to return to the game in overtime would end in such a weird fashion.

And it's also fitting that the Rangers would get their fans hopes up for a couple of minutes before breaking us down again. With the loss, they fall to 7-6-4 on the season, including a terrible 1-4 record in shootouts.

Their next game should be another fun one, as they welcome Ryan Callahan, Anton Stralman, Brian Boyle, and that Stamkos dude to MSG on Monday night.

Quick picks this week. I have to visit a college, so I have absolutely no time. In fact, I don't know if I can even watch any of today's games.

I was right on Thursday, as Andy Dalton played like the red-headed bastard child of Quincy Carter and Jamarcus Russell. The Browns obviously covered the 7 points that they were given.

I reserve the right to flip my pick to Jaguars +7 if Tony Romo is inactive on Sunday.

I hate the Colts. I finally decided to believe in them last week, as their defense has improved greatly over the last few weeks. Then they proceeded to allow Ben Rothlisberger to complete 40 of 49 passes for 522 yards, with the completions being tied for the eighth highest mark ever, and the yards being tied for the fourth best single-game in NFL history. Nice job.

The Saints finally decided to show up last week. Thanks a lot.

The Bears decided not to show up last week. Thanks a lot.

If you couldn't tell, I'm not happy with how my picks turned out last week, so I think we should move on to this week. On Thursday night, I made my pick on Twitter (@WilliamBotchway).